Welcome to the Robot Apocalypse 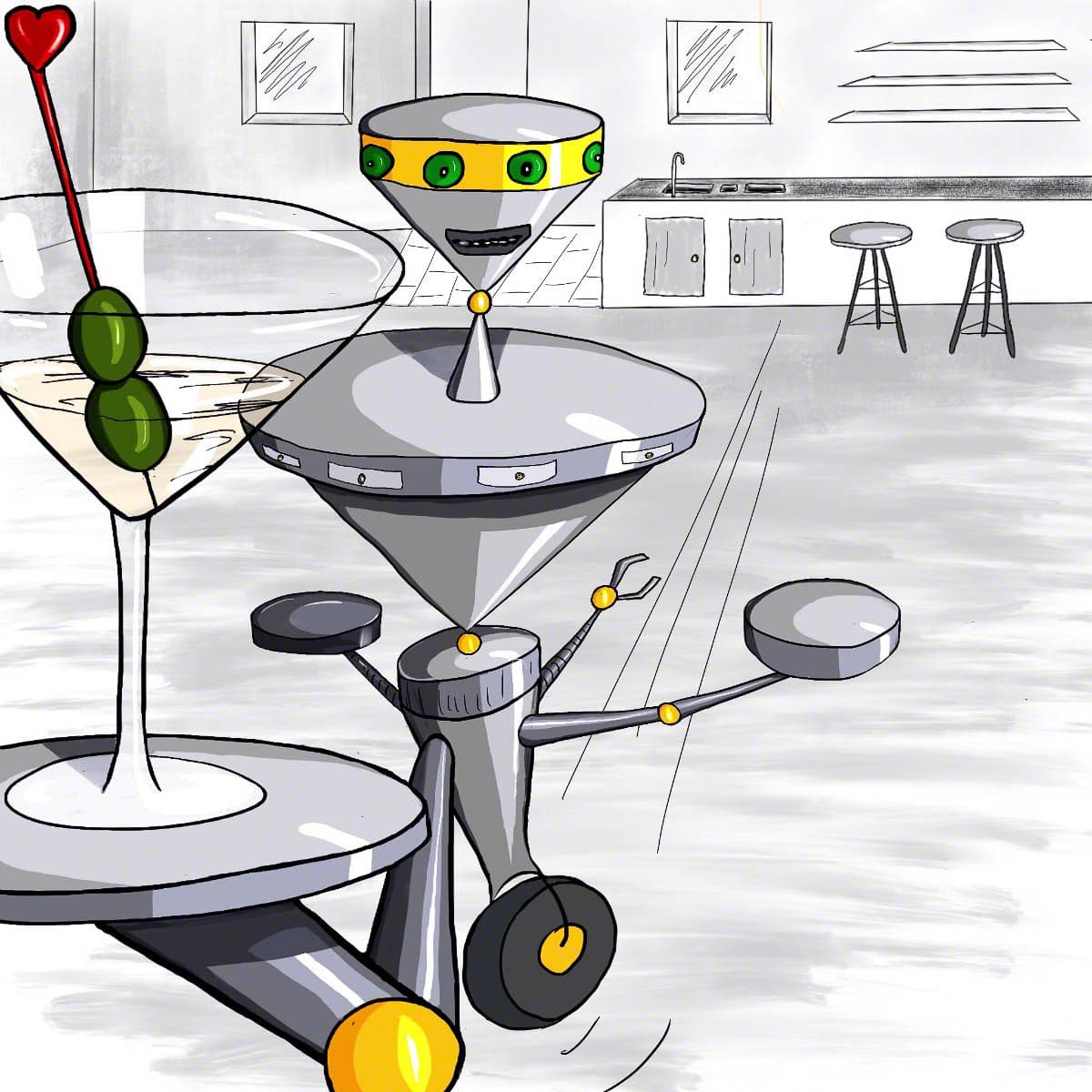 Good morning, everyone. I have finally convinced our very favorite guest blogger, the writer in our house, to share with us a new story. Today, the first chapter, with illustrations by yours truly, of course.

Over to you – David – and The Robot Apocalypse | Chapter #1!

And because there is a drink involved (pictured),  I will link with Elizabeth and her T-gang over at AlteredBooklover and with Les for her Coffee Chat.

Welcome to the Robot Apocalypse 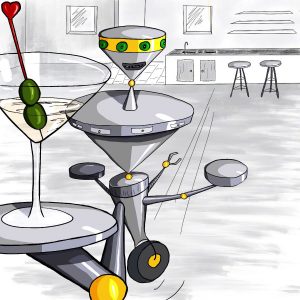 “Thanks a lot, Steve. I really appreciate you letting me crash here for a few days.”

“Hey, that’s what friends are for, bud. But what happened to your apartment?”

I glanced at him, and tried to gather my thoughts. Steve was a bit taller than I, and honestly a bit handsomer as well. He was a good friend that I’d known since before high school. I admit that there had been a little rivalry between us – one that always seemed to end up with him being ‘ahead’ of me, but we were good friends nonetheless. He had a girlfriend before I did, a car, went to college, got married, had a fancy house, and then got his first divorce. Which is one reason I was now staring at the stack of old pizza boxes on a dinged up coffee table at his newly minted “bachelor pad.” Ugh. My apartment – what happened to it? How could I explain it all to him? You don’t just casually announce that you have foreseen the robot apocalypse.

“It’s a long story. And I really don’t want to talk about it. Why don’t you let me treat you to dinner instead? There’s a new Chinese place that delivers.”

Just seven weeks ago I had no clue.

What started it all? My laziness I suppose. I frequently came home from work feeling used-up; and having to spend those precious few minutes of my evenings with mundane household tasks was becoming a burden. I couldn’t afford an RPA (Robotic Personal Assistant), but still I dropped by Chiefs Electronics from time to time on my way home. That night I must have lingered a little too long, staring at the sleekly articulated hands of the PA 7000: Lifebots’ flagship model.

“Say, friend, you know the 7000 can really free up your schedule to give you more time for that active social life you deserve,” announced the ever-so-chipper automated sales assistant.

“I was just looking,” I said reflexively, and started walking further.

“We have a special this month. Just $99, with a two-year contract.”

I shouldn’t have taken the bait. Even giving the simplest response to an automated sales assistant was like strolling leisurely through a lion’s cage wearing a vest of fresh pork loin. “Yeah, but the monthly fees for those contracts are a killer.”

I paused. That was less than my phone bill. A lot less. “What’s the catch?” I said, exercising my final shred of restraint for the evening.

“No catch, friend! The auto purchase setting is enabled with the contract, and there’s a few sundry marketing permissions, but this will save you even more time!”

Why was I talking to the automated sales assistant? Of course I was suspicious, but maybe my desire to have my very own PRA was fogging my judgement. “How exactly is this going to save me more time?”

“Take grocery shopping, for example. What a waste of time, right? Even if you do use a delivery service, you still need to figure out what you need, fill out the online form, send it in, and then, what if you forget something? Don’t you feel foolish when you order that nice juicy pack of sausages, but then realize you’re out of mustard? You’re a busy man; you don’t have the time for that kind of hassle.”

A few dozen pages of contractual legalese later, and I was the proud owner of a sleek white PA 7000m. Or so I thought.

Chiefs delivered it to my doorstep an hour later, as promised, and the sullen delivery driver even offered to take away the packaging. “No one ever returns these things, he said with a look of resignation.”

Should I have inquired why? In retrospect this should have caught my attention, but I was so focused on my new prize, that I agreed without giving it a second thought.

The PA 7000m really was a sleek design. It was humanoid, with two arms and two legs, just over 5′ tall, and an androgynous face. Large enough to be useful, but not so large as to appear threatening. Neither male nor female, but customizable to hint at either. The unit came pre-charged, and sprang to life as soon as I muttered, “Let’s set this thing up.”

“Where would you like me to plug in my charger?” came the default voice.

It had never occurred to me that the unit would be able to set itself up. This was even better than I had imagined. “Right over there by the floor lamp; I think there’s a free outlet.” I customized the voice to a female tone; using the personality setting “Tanya,” which carried a charmingly subtle foreign accent, set the eyes to luminescent purple, and entered my credit card information.

My stomach growled ever so slightly. I glanced at the clock. 9:13. I had completely lost track of time. “I’d better fix something for dinner, it’s getting late.”

“Is this later than when you usually have dinner?” said the unit.

“Yes, it’s just that I was having so much fun setting you up, I lost track of time.”

“One of our local service partners is having a special. Free delivery on orders over $18. I could order it for you, and that way you could continue to enjoy setting me up. You do like linguine al fredo, correct?”

“Yes. How did you know?” I was incredulous.

“The take out menu you have stuck to your refrigerator. There’s a receipt still stapled to it. I hope you don’t mind my looking at it.”

I was stunned. The menu was a good 15 feet away, and partially obscured by a “Hungry Sharky’s” refrigerator magnet. The visual sensor resolution on this unit was amazing.

“No, not at all! Read whatever you like. And linguine sounds great.” $18 was more than I would usually spend on a week night, but tonight was a special occasion. My very first PRA. I didn’t even think Steve had one of those yet.

After a later-than-expected evening, I decided to be bold; I would disable the alarm on my phone, and use the PRA instead. I had been having enough problems at work without oversleeping and coming in late, but this was a PRA, and not an ordinary smartphone. This was a much more advanced technology, so there should be no risk that I would set the time wrong, or forget that it was on silent mode or the like. And I was never really happy with the alarms on my phone anyway — no matter what alarm tone I chose, I still hated getting up in the morning. Maybe this would be different.

I was awakened from my slumber by a pleasant female voice. “Roger. It’s time to wake up.” It was followed by a gentle nudge on my shoulder. In my groggy haze I couldn’t remember what had happened. Had I gone out to a bar last night? I hesitantly reached for the source of the nudge. Smooth, cool fingers. Felt like plastic. No, it was the PRA. This would take some getting used to. It was better than my alarm, but I still didn’t like getting up. At least I could look forward to this evening.

I’ll admit I was distracted at work that day. I had long dreamt of having a PRA; every advertisement I had seen over the years had tempted me with yet a new time-saving functionality for a device I would never be able to afford. Now that I had one so suddenly, I was caught flat-footed. All I could think of before I left for work was “Could you clean up while I’m at work?”

Claudia here again. Tell me, who of you have nodded in agreement with a lot of Roger’s sentiments? I certainly did, and I didn’t write the story. Hm, maybe David is trying to tell me something? Just kidding, there is no resemblance to living or dead creatures close or far away, or something like that.

We certainly hope you liked this somewhat different from the usual art form on this blog of mine and will be back for the next chapter in a few days, well, most likely next week.