Last Saturday marked the day of the annual year end gala of the New Jersey Windsurfing and Watersports Association, which was held for the second time in a row at the Brant Beach Yacht Club on Long Beach Island. Or so I have been told, since this was the first time David and I attended since we moved to New Jersey and joined the NJWWA. There were some familiar faces (Brian, Tom, Jeff + Barb, Marah), whom we had met over the summer at various windsurfing locations, but there were a lot more that we did not know until Saturday night.

We got there around 5:30, after a two hours drive, dropping our duffel bag off at a local hotel in Beach Haven and after an unintentional brief check-in with a wedding reception held at the ‘other’ Brant Beach Yacht Club, we found everybody already there, chatting, laughing, having a beer or soda and generally be in a cheery mood. Just the way it is supposed to be. We spotted a couple of empty seats and found ourselves among the ‘French connection’, having paté and red wine for starters. Everybody attending brought a little something and soon enough the 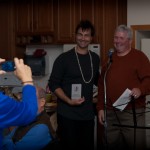 buffet was opened and got stormed by the hungry attendees.

When it got a  little quieter Tom Latham, the association’s president, took the opportunity to get to the official part of the evening. A review of the past year, which, in brief, has not been bad, in fact, the best one so far, but there is still a lot to be done and improved. Sponsors got thanked, and several members received appreciation plaques for their outstanding achievements to the well-being and growth of the windsurfing sport in general and the Association in particular. Finally, words were spoken by Tom (president) and Bill (treasurer) in memory of Paul Smith, a founding member of the Association, who passed away earlier this year while doing what he loved so much – windsurfing. 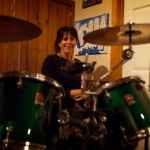 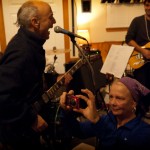 But the evening soon turned on a cheerier face again, because it was time for some live music. The Toe Jams = 2 guitars, percussions, vocals and bass, formed of three windsurfers and one that still has to be converted!) were about to start their performance and rock ‘da house (as Tom frequently noted). And they did! Our favorite quote: ‘What song should we play? How about ‘hurricane’, that seems to be a fitting song for windsurfing!’ Their repertoire consists of good old rock music through the ages, with our favorites being songs of The Ramones and Tom Petty, plus a very rockin version of Ring of Fire. They certainly were on fire (if only a slight, tiny, little bit unorganized ;-)) and they got their audience going. Check it out on Youtube. Initially they were supposed to finish up after about 2 hours to leave time for the raffle. But after the raffle they continued jamming, in the end losing the bass player and swapping one guitar player.

When David and I finally left the Club we did so realizing once again that windsurfing is a great sport, which in this case  brought together wonderful people, who are intent on growing our sport.

We returned to the hotel with big smiles on our faces and ringing ears.

Truly an evening to remember!

(here are some more photos of the festivities 🙂)